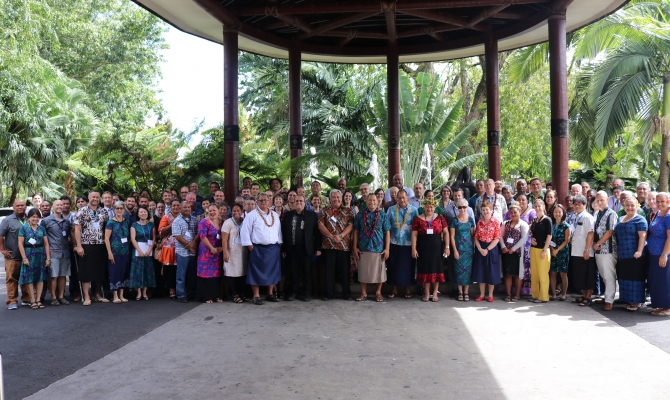 APIA: The 8th Pacific Environment Forum (PEF) kicked off in Apia this week, bringing together representatives of the Secretariat of the Pacific Regional Environment Programme (SPREP)’s Pacific island countries and territories, non-governmental organisations, private sector, communities and partners to engage in a more informal dialogue prior to the 29th SPREP Meeting of Officials this week.

The PEF was first launched in 2011, and was instigated by the Secretariat in response to requests from Members and partners for an informal setting to facilitate discussion and dialogue amongst officials and other stakeholders on key environmental issues, and to provide an opportunity to exchange views, share experiences and learn lessons from each other.

This year, the theme of the PEF is “Cycling away from non-essential single-use plastics”, which will reinforce and reaffirm the fundamental role of best practices in waste management to prevent the pollution of our atmosphere, soil and water.

SPREP Director General, Mr Kosi Latu, said in his opening remarks that a key concern in the region when it comes to waste management is the predominantly one-way flow of imported products and their associated packaging into the Pacific, and hardly any way for them to go back out.

He said Pacific islands need to look at recycling and acknowledged that while some Pacific island countries have started their own recycling systems, they are only at a rudimentary level, while others lack the means, capacity and funding to do so.

Plastic pollution will feature prominently in the forum dialogue.

Mr Latu said, “Of all the waste streams, plastic, by its enduring nature and convenience – particularly as a single-use product – has become a critical global concern.”

“An estimated 8 million tonnes of plastic enter our oceans every year. What is needed is immediate and effective solutions to combat plastic pollution. SPREP is leading this work through the Pacific Marine Litter Action Plan which is currently being implemented in the Pacific.”

“We have also seen an increase in resources coming into the region, with funding assistance of 16 million received from Australia through the Pacific Ocean Litter Project to implement the Pacific Marine Litter Action Plan.

The 8th PEF presents an opportunity for Members, partners and stakeholders to exchange and share ideas on a range of concrete actions that need to be taken in order to address some of the most pressing environmental issues facing the Pacific region.

It will also emphasise on the critical need for Members to create enabling legislative and policy frameworks associated with concrete actions.

An example of this was the recent Greening of the Samoa 2019 Pacific Games, which SPREP spearheaded in partnership with the Ministry of Natural Resources and Environment of Samoa, which aimed to eradicate the use of single-use plastic bottles at the Games.

Through the Greening of the Games initiative, one million 500ml plastic bottles were removed from circulation, and a change in mindsets and behaviours was evident, with people starting to realise the importance of tackling the issue of plastic pollution.

The PEF precedes the 29th SPREP Meeting of Officials and the Pacific Environment Ministers’ High-Level Talanoa, which are all taking place in Apia this week.